Please join me in welcoming Charlene Raddon back to The Second Half. Today she's sharing with us the cover for her brand new Western historical romance, Taming Jenna. 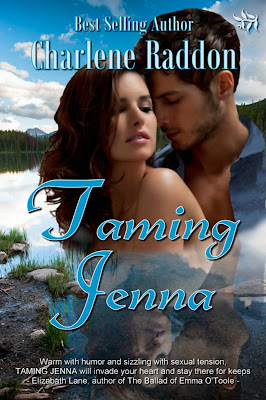 It's gorgeous, Charlene. Congratulations! Please tell us a little about the story.

THE WRONG MAN
Deserted by her father at the tender age of seven, Jenna Leigh-Whittington had taught herself to ride, shoot, brawl…and steer clear of the opposite sex. But now, in a lonely Utah canyon, the Pinkerton agent has drawn her gun on a rugged stranger—only to discover that, far from the dangerous outlaw she’d been tracking, he is Branch McCauley, hired gun…and the most irresistible rascal ever to tempt and torment a woman!
THE RIGHT WOMAN
If there’s one thing McCauley trusts less than a female, it’s a female who packs a six-gun. But what a woman! Vowing to bring the sensuous hellcat to heel, McCauley has no inkling that their passionate battle of wills has just begun. Taming Jenna will be the most seductive—and satisfying—job he’s ever taken on.

Charlene will be  holding a drawing for a $30 amazon gift card for all those viewers who visit each stop on her blog tour and leave a comment with contact info. She will also be awarding three copies of her new book to randomly chosen participants.
Here's her tour schedule: 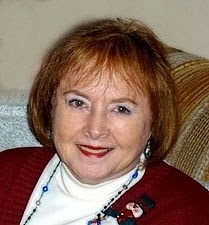 Charlene Raddon began her fiction career in the third grade when she announced in Show & Tell that a baby sister she never had was killed by a black widow spider. She often penned stories featuring mistreated young girls whose mother accused of crimes her sister had actually committed. Her first serious attempt at writing fiction came in 1980 when she woke up from a vivid dream that compelled her to drag out a portable typewriter and begin writing. She’s been at it ever since. An early love for romance novels and the Wild West led her to choose the historical romance genre but she also writes contemporary romance. At present, she has five books published in paperback by Kensington Books (one under the pseudonym Rachel Summers), and four eBooks published by Tirgearr Publishing.


Thanks for visiting us today, Charlene. Taming Jenna looks like a real winner, not to be missed!
Posted by Alison Henderson at 12:30 AM 9 comments:

Have You Hugged Your Husband Today?

Husbands are fragile, especially at our age. I have received several reminders of this fact during the past few weeks. Within days of each other, the husbands of two friends began chemotherapy for advanced cancer. Their families are determined and upbeat, but terrified nonetheless. Then just this week, another friend suddenly lost her husband to a heart attack at age sixty-three. OG is sixty-four and reminds me daily that he's a delicate flower. That was funny when neither of us believed it; it's not so funny now.

The hardest lesson of aging is coming to grips with your own mortality. I think this is especially difficult for men. For the first few decades, they live as if there's no tomorrow, as if they're immortal. When youth and strength begin to fade sometime in mid-life, the process can be slow at first and easily ignored or discredited by excuses, but by sixty it's impossible to deny. That piece of furniture or machinery they once lifted with ease seems to have doubled in weight. They can no longer run that extra mile without gasping for breath. Aches and pains show up with increasing regularity.

I don't know about your husband, but OG is not going gently into that good night. He's resisting with every fiber of his being. As a result, he's racking up injuries that will likely be with him for the rest of his life, and that's hard to accept. Last spring, we bought him a new (very heavy) barbecue. Instead of asking a neighbor or waiting for me to help, he unloaded it from the back of his truck alone and dragged it up the sidewalk to the patio by himself. The result was bilateral rotator cuff tears that have resisted physical therapy and my not be amenable to surgery. Last month, he replaced the glass door in our shower. To get it to fit properly, he had to reduce the width of one of the long, metal pieces with his grinder. He was too angry and impatient to wear hearing protection, despite my pleas, and now he has relentless tinnitus that may never improve.

I'm frustrated because he refuses to take care of himself, but I understand. It's very hard for a man to admit he's no longer young, strong, and immortal. All I can do is love him and do my best to make the transition to this new phase of life easier and more palatable. It isn't easy and is only likely to get worse. Maybe that's why the stereotype of grumpy old men continues to ring true.

What about you? Have you got any secrets to aging gracefully?
Posted by Alison Henderson at 12:30 AM 6 comments: