Just in Time for Halloween - Linda Andrews' UNMASK MY HEART 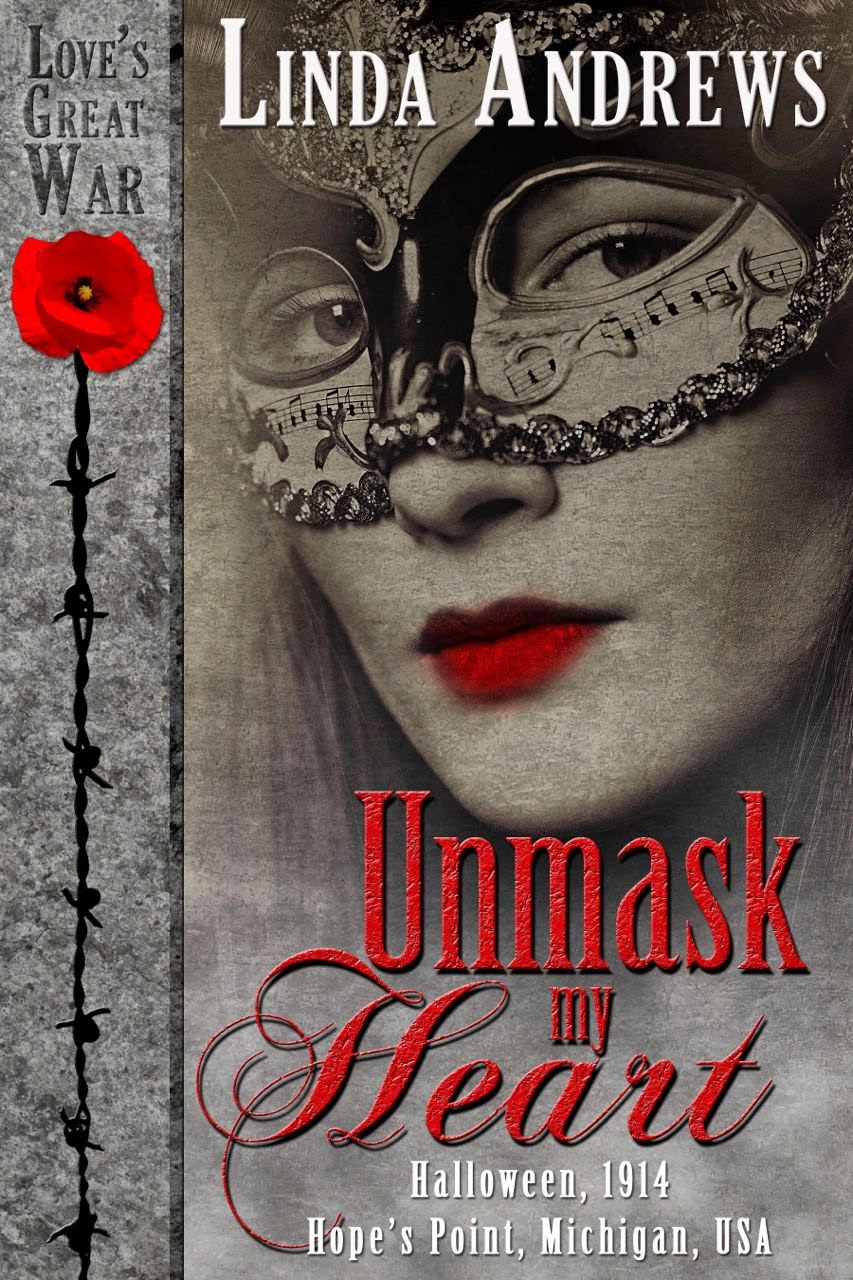 Please join me in Welcoming Linda Andrews to The Second Half. Linda is the author of a brand new historical romance entitled UNMASK MY HEART. She's here to tell us about her story, and she has a giveaway for a lucky commenter! Take it away, Linda.

1914. A mere hundred years ago. So many of our modern conveniences were around then, that I knew I would have problems giving this the proper historical feel. And what better place to base Hope's Point Island on than Mackinac Island in Michigan. Easy-peasy right? After all, Mackinac has banned cars and done much to preserve it's Victorian heritage.

You know the saying about the best laid plans...

It seems that to draw those wealthy tourist dollars in, Mackinac had indoor plumbing, electricity, and telephone service on the Island as early as 1904. Ack!

Fortunately, there were small details I could use to establish that 'olde tyme' feel, but before we get to the excerpt, tell me the one thing (excluding computers and cellphones) that makes it obvious the story takes place in another time. I'll let random.org chose one person who leaves a comment with their email address to win some Halloween bling. Here's a blurb about the story:
Her heart can't give him up. Her head can't trust him.

Everyone Phoebe Monpetit has ever loved eventually abandoned her. Even Gabriel Stephens, the man she thought she'd marry. For the last twelve years, she's muddled through alone, cobbling a life together.

Gabriel took the first opportunity to escape his family's constant fighting and rarely looked back. When war explodes across Europe, he learns what his cowardice has really cost him.

This Halloween, he'll use every trick he can to win back Phoebe's heart.

Will she keep her true feelings covered, or will she let Gabe unmask her heart?

And now for an excerpt to tempt you:

Meowing, Thom hunkered down on the oilcloth floor by the sardine can she used to hold his food.
"Yes." Phoebe leaned against the door to shut it. The frigid breeze whistled through the openings around the jamb. After filling the cat's dish half-full, she joined her grandmother at the stove. "And I have six bottles this morning to sell."
Gigi grunted. Lifting the lid off the birch bark basket, she chipped off a piece of maple sugar from the lump inside the makak and added the clear solid to the saucepan of water.
Phoebe held her breath while pouring the rest of the milk into the kettle.
Grandmother usually returned from the lower peninsula in a happy mood, glad to be home and full of stories of the summer's events. She hadn't said a word since Gabe had left without a greeting last night, slamming the door behind him.
Setting the bucket in the tin sink, Phoebe filled it half full with cold water from the tap.
Gigi scraped the Johnnycake off the skillet and flipped it.
Phoebe sighed. She would have to question her grandmother. Her stomach cramped. But could it wait until after breakfast? Four heaping spoonfuls of cocoa turned the cream a light brown color.
Muttering, Gigi tossed a thumb-sized piece of maple sugar into the warming cocoa.
No point in putting it off. "Is something wrong, Gigi?"
Grandmother's black eyes narrowed. Hefting the skillet, she slid the corn cakes on a blue and white plate containing half a dozen others then returned the pan to the stove. "Yes, something is wrong."
Using a wooden spoon, Gigi scooped out a dollop of grease from the jar on the wooden counter and added it to the pan. A deft shake later, the oil coated the entire surface.
Knowing her grandmother would reveal everything on her own timetable, Phoebe took tea cups, saucers, and plates from the ledge near the sink. The bone china rattled in her hands. Generations of French brides would haunt her if she broke a single piece. She carefully set the place settings on the table and added two polished forks and knives.
Daisies embroidered the linen napkins sitting next to the blue plates. Her reflection frowned back at her from the copper pots hanging on the wall opposite the door. Both were the dowry of the last French bride to emigrate to America and used only on special occasions, like today.

You can find UNMASK MY HEART only on Amazon: http://www.amazon.com/Unmask-Heart-Halloween-Historical-Romance-ebook/dp/B00ODALVOC/
Posted by Alison Henderson at 12:00 AM 2 comments:

The Big Six-Oh: Lessons on Aging

Today is my birthday. It’s a big one, and I’m none too pleased. After a certain age, if you complain about your birthday, people always say, “It’s better than the alternative” in a disgustingly cheery voice. They’re right, of course, but that doesn't keep me from wanting to slap them. In honor of entering my seventh decade, I've decided to share a few of my observations on aging. They’re not earth-shattering or original, but they are personal. If you’ve already passed this milestone, see if they resonate with you. If not, just look at what you have to look forward to!

1.    Your body will never be the same again. I've always been reasonably energetic and youthful, but things are changing, and I know they won’t go back. I still exercise daily, but I can no longer get up from a squat without using my arms. If I have to pick something up off the floor, I kneel. When OG needs my help carrying something heavy, I no longer assume it’ll be a breeze. It won’t. Menopause has stolen every last speck of collagen in my body. Everything’s starting to sag, and my fat seems to be migrating. Parts that used to be well-padded are now spare; parts that used to be svelte now look like sacks of pudding. On the upside, I can still do everything I want to do, just not as quickly.

2.    Anything can happen at any time. After OG’s stroke last spring, we ran smack dab into the reality of mortality—our own and each other’s. He escaped without significant effects, but we recognize the outcome could have been very different. After sixty, you can no longer glibly acknowledge that life might throw you an unexpected curve ball. You have to accept it in the marrow of your bones.

3.    Take time to appreciate the small wonders and everyday beauty around you. I find I’m much more interested in nature than when I was younger. I look for beauty in the tiny details as well as the broad vistas. That’s a big part of why Carmel Valley speaks to me. I’ve never been surrounded by such beauty, and it’s more important to me now than ever before.

4.    Take the time and effort to truly get to know and understand yourself. When we’re working and raising families, there’s not much time for introspection. Someone always needs something, and we do what we must to get by day to day. When those demands lessen, you owe it to yourself to figure out what makes you tick and what you need to live the rest of your life in the most satisfying way possible.

5.    Have good role models. Pay attention to the older people in your life, whether family or friends. Spend time with them. What choices have they made to improve the quality of their lives as they age? My maternal grandmother lived to be ninety-eight, and she was a huge influence on me, especially in the last several decades of her life. I learned what I need to know about being old from Gram.

6.    Be kind—to yourself and others. This speaks for itself. There will be those who need your help, and you will need theirs. Accept and rejoice in it.

I’d love to hear how you feel about growing older. I’m trying to accept it as a blessing as well as a challenge, but I’ll confess that some days I find myself repeating OG’s perennial observation: “It isn't easy”.
Posted by Alison Henderson at 12:00 AM 24 comments: